Let’s rewind to Valentine’s Day. I’m single. I’m not feeling well. My mom is in town and our plan is to eat dinner and watch movies. As the sun goes down, I decide that I need a brownie—like I really need a brownie, for aforementioned reasons—and proceed to pull every baking book off of my shelves in my search for my ideal brownie recipe. 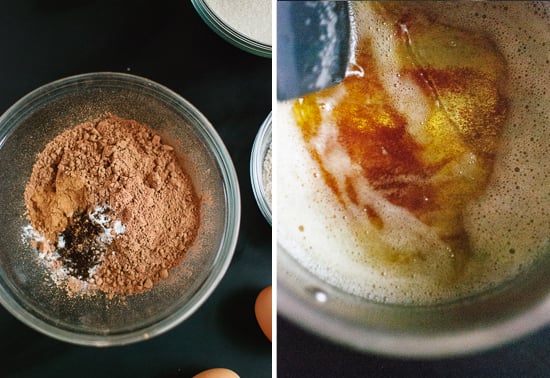 I finally found a promising recipe in my copy of Alice Medrich’s Sinfully Easy Delicious Desserts. It was a thinner brownie than I wanted, but it looked dark and delicious and had the most magnificent shiny, crackly top. The recipe contains a fair amount of butter, as legit brownies should, and the butter is browned before the addition of sugar and cocoa powder. If you’re going to put a lot of butter in something, you might as well brown it for extra flavor.

Alice’s recipe also called for a lower-than-usual baking temperature (325 degrees) and specified that the brownies be baked in the lower third of the oven. All of the chocolate flavor came from cocoa powder, too. Interesting. 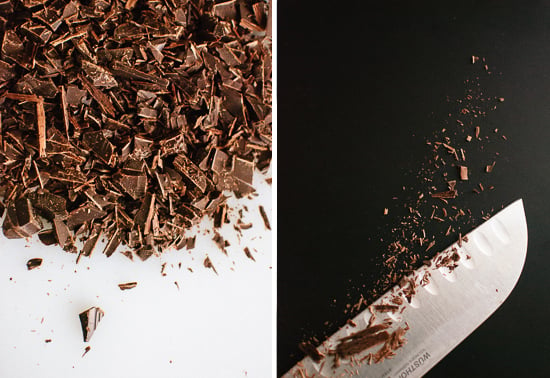 Alice’s brownies made from scratch turned out beautifully. Crackly top. Dense, fudge-like interior. Rich, complex flavor. They weren’t quite matching my idea of the quintessential brownie, though. I wanted a taller brownie, one that is a little more like a brownie than fudge, with some chopped dark chocolate thrown in for textural interest. Thus began my obsessive quest for the quintessential brownie recipe.

Five batches of brownies and a bunch of brownie research later, I think I’ve found it. I learned a lot along the way. I learned that in order to achieve the shiny, crackly top, you have to stir the sugar into hot butter so it melts. Alice’s low baking temperature and rack positioning also seem to improve texture, but I couldn’t tell you why.

My final recipe calls for more flour and a little baking powder to help the brownies rise. I also used whole wheat flour, as always, but there’s so much chocolate in the brownies that I promise no one will be able to tell. I don’t make statements like this very often, but this really is the best brownies recipe I’ve ever encountered. (I’ve provided footnotes in my recipe so you can adjust the recipe to produce your ideal brownie.) 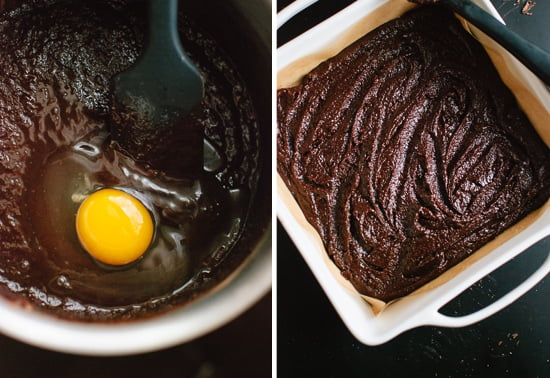 Ever since I started making simple baked goods from scratch, I’ve wondered how boxed mixes ever became mainstream. Sure, you don’t have to measure out flour and baking powder, but you still have to add liquid and crack the eggs. That hardly saves much time, and comes with the additional cost of preservatives and ingredients that should never be in your food. (Hydrogenated oil is the devil.)

Michael Pollan, my favorite food writer, came to Kansas City last summer to talk about his latest book, Cooked. He finally solved the boxed mix mystery for me. 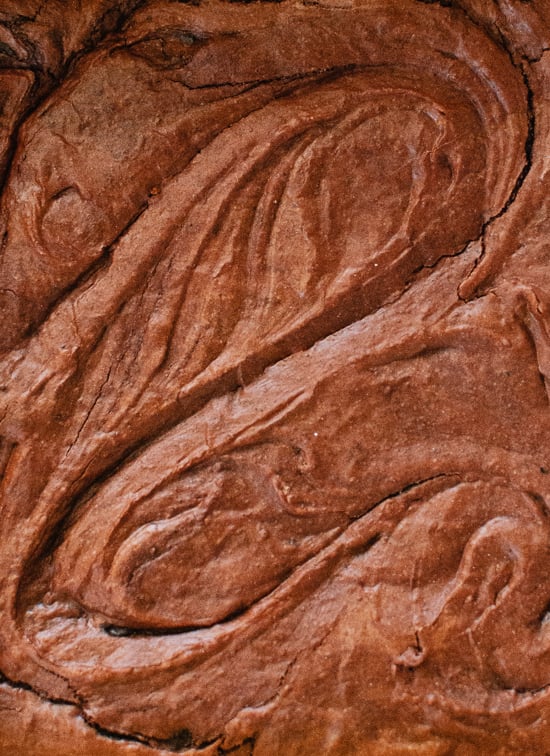 Pollan explained that the first boxed mixes contained powdered eggs, which removed the step of cracking eggs into the bowl. I mean, why go to the trouble of cracking eggs into a bowl if you don’t have to, right? Wrong. American women initially wanted nothing to do with the boxed mixes. They felt like they were cheating when they used them. Once the manufacturers took out the powdered eggs so we could crack eggs over the bowl, we felt like we owned the final result. The baked good was then homemade enough to present to our loved ones.

If you have never made brownies from scratch, give these a try and I promise you’ll never reach for a box again. If you’re pinched for time, throw in chocolate chips instead of chopping the chocolate by hand. Ta da! Homemade brownies made from scratch and baked with love. 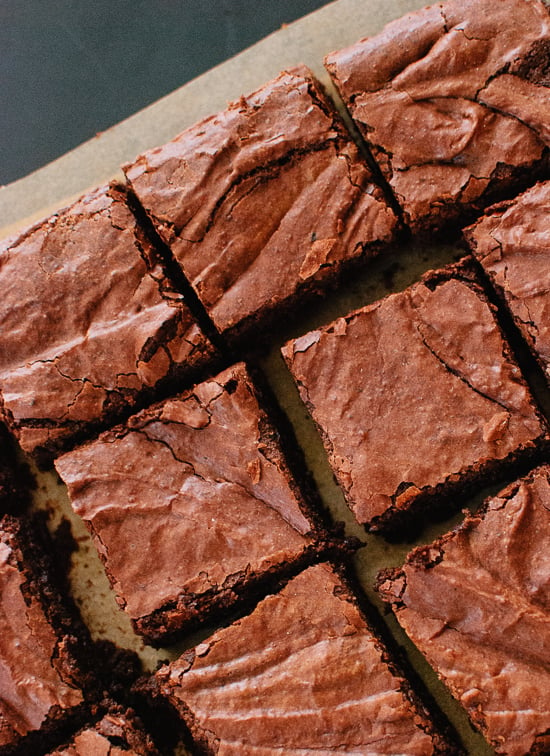 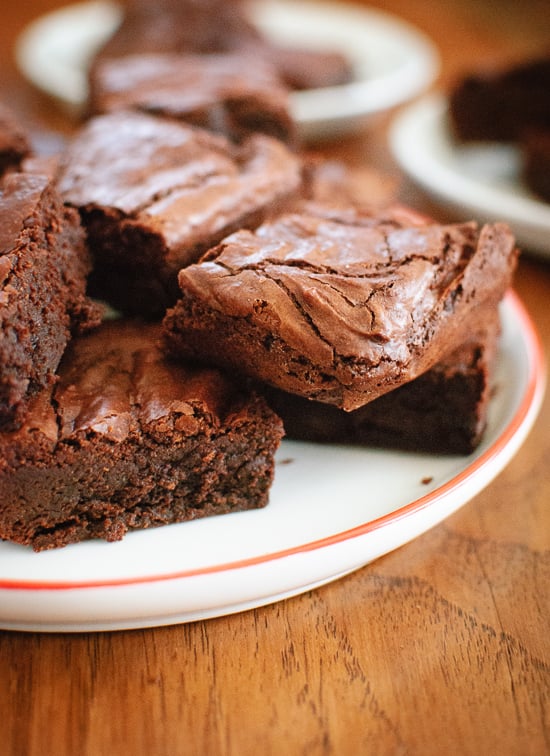 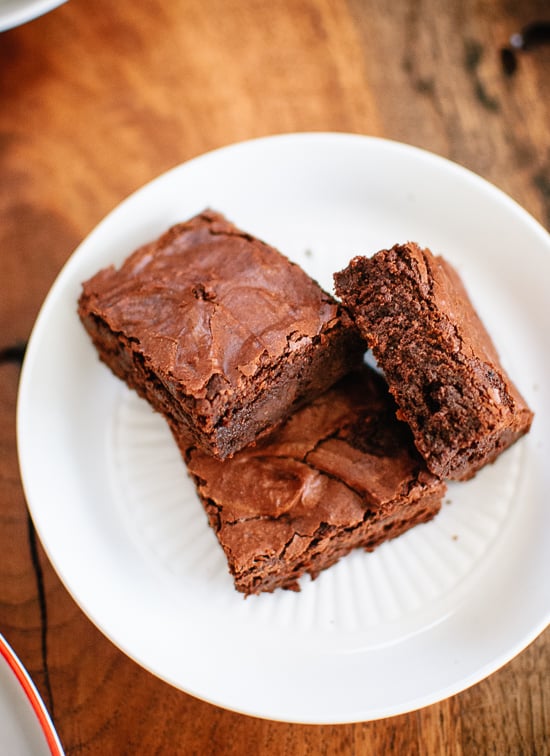 Rich, dark, chewy and fudgy brownies made from scratch. These brownies are flavored with cocoa powder and brown butter and feature a beautifully swirled, flaky top. I don’t dare make claims like this very often, but this is the very best brownie recipe!

The information shown is an estimate provided by an online nutrition calculator. It should not be considered a substitute for a professional nutritionist’s advice. See our full nutrition disclosure here.

P.s. If you really want health-ified, naturally sweetened brownies, I have some dark chocolate zucchini brownies over here. Note that they don’t have the crackly top that these brownies do and that the zucchini hardly adds much nutrition because it’s almost entirely water. If I made them again, I would try skipping the zucchini altogether, upping the cocoa powder to 2/3 cup and decreasing the baking powder to 1 teaspoon for richer and less cakey results. 5/2/14: sorry folks, Terri says the brownies don’t turn out well when made this way!